Plenty of sunshine soaked rock, some classic 90s brit pop and a dash of murder and mini golf...

Apologies for the tardiness of the blog, but we've been on holiday and playing catch up... All music, all the way this installment with just a snifter of murder and mini golf...

On Tuesday night as a primer for the following night's excursion to the MOTH Club in Hackney, Mr C took a trip to the Betsey Trotwood pub near Old Street for a last minute addition tot he week's adventures to catch Californian Brent Rademaker performing an intimate acoustic show in the tiny upstairs room.

There were a couple of warm up acts in the form of David Christian from the band Comet Gain and Welsh singer songwriter Simon Love. Of the two Simon Love was more my cup of tea coming across like a passive aggressive Paul McCartney with his smartly cynical pop songs with catchy choruses and hummable melodies, I'd highly recommend picking up his album 'It Seemed Like A Good Idea At The Time', and check out his single 'The New Adam And Eve' as a good starting point.

Rademaker was up next, initially starting of solo with an acoustic guitar he played a couple of Further and Beachwood Sparks songs, which pleased the die hards there, (guilty), and then was joined by GospelbeacH's guitarist and keyboard player to take us through several tracks from their debut 'Pacific Surf Line' and their latest 'Another Summer Of Love'. 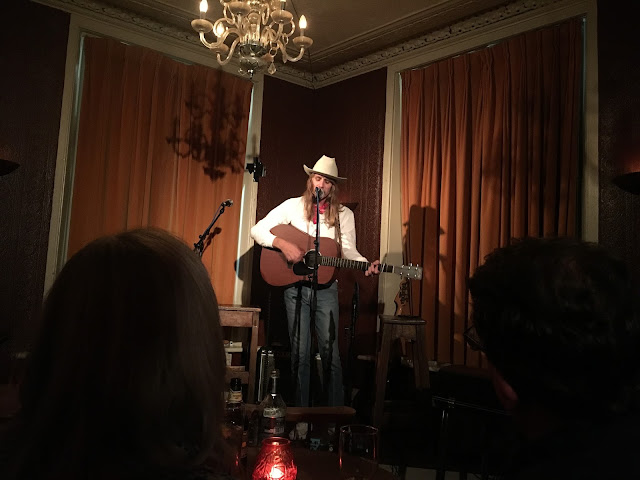 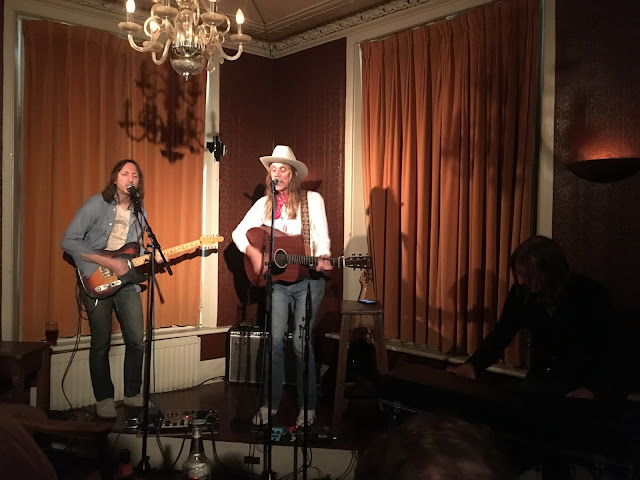 All the material sounded great and it was a real treat to be amongst such a tiny audience who really appreciated the acts and actually listened.

This was just a warm up for the following night however with a GospelbeacH full band show...

The Hanging Stars opened and got the audience primed with some lovely sounding Gram Parsons/Neil Young inspired tunes, a mixture of material from their debut 'Over The Silvery Lake' which is highly recommended and some material from the upcoming new album due next year. Well worth checking out.

Next up was Miranda Lee Richards, previously of The Brian Jonestown Massacre for a brief spell and now a solo singer songwriter, backed by GospelbeacH and promoting her latest album 'Existential Beast'.

Particular standouts were 'Ashes and Seeds' and 'On The Outside Of Heaven', check out her latest album and it's predecessor 'Echoes Of The Dreamtime' for some criminally underexposed talent. 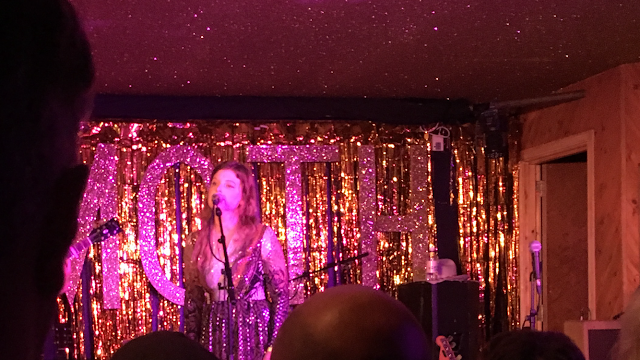 Next up were headliners GospelbeacH, launching straight into 'Sunshine Skyway' from their debut, a sunshine drenched slice of country and from there didn't let up.

Gospelbeach's sound has evolved with their latest release which has a more 70s FM rock approach reminscent of Tom Petty and The Heartbreakers.

Tracks such as 'Hangin' On' and 'Kathleen' are particular favourites and were performed with a great energy, Miranda Lee Richards joined them for a great closer with 'California Fantasy' which brought the show sadly to a end.

Hopefully they'll be back over here soon, whilst their latest album 'Another Summer Of Love' is definitely one of the albums of the year and should be on everyone's radar. 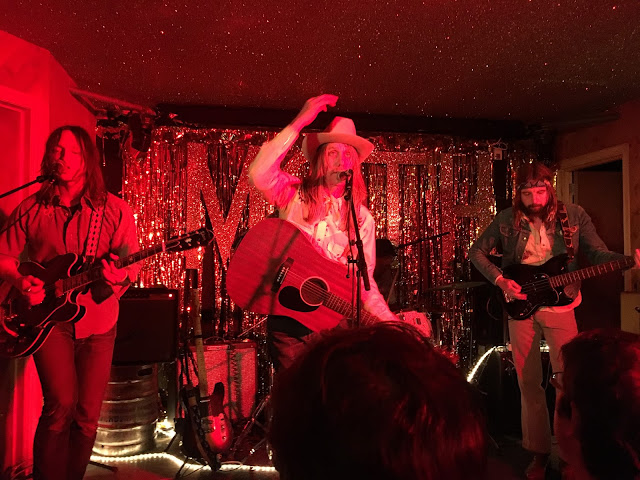 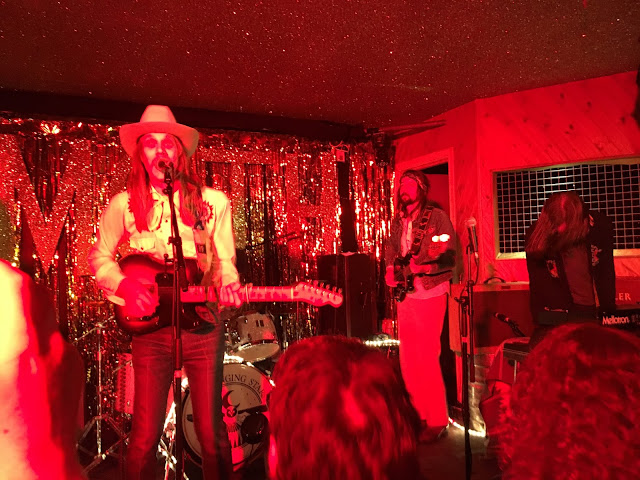 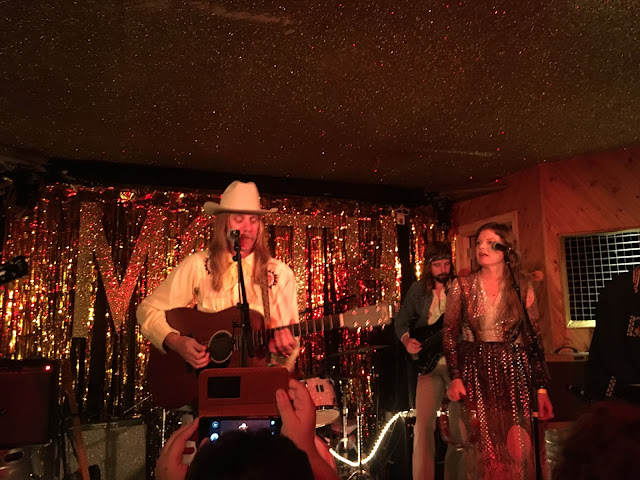 The full set was as follows:

For the bank holiday weekend we headed down to the coast to catch Ocean Colour Scene live on Hastings pier.

We're both big fans of their 90s classic Moseley Shoals which was being performed in full, alongside some of their other hits so our expectations were high.

There were also two support acts in the form of Peter Hook & The Light and The Bootleg Beatles.

Next up were The Bootleg Beatles who performed a set focusing primarily on the earlier part of the Fab Four's output, 'She Loves You' and the like always guaranteed to get the crowd going, and performed very well as expected.

Finally as the sun began to set Ocean Colour Scene took the stage and immediately broke into their breakout hit 'Riverboat Song' and from there they didn't let up. They proceeded to progress through the entire album, although in a slightly different order and the crowd, were clearly lapping up every minute of it singing along to every song.

They then played a few other hits from their career including 'Traveller's Tune' and '100 Mile High City'.

They still sounded great, Simon Fowler in particular still sounding as good as he did at the time the songs first came out.

If you're a fan of the album it's well worth catching one of these shows!


On Sunday morning, before headed onwards to a short break in Brighton we decided to check out the intriguing True Crime Museum on Hastings seafront.

The entrance enticingly had quotes and snippets of info regarding infamous serial killers and murderers and the opportunity to peruse the collection of evidence and displays in the chilling caves was too irresistible to pass up.

The museum starts with a recreation of an actual electric chair used in the US which sets the mood for what's to follow.

Seperated into sections dealing with each different sort of crime the displays encompass robberies, heists, murders, forgery, animal abuse, drugs and serial murderers, with a couple of mannequins creatively used to recreate scenarios... 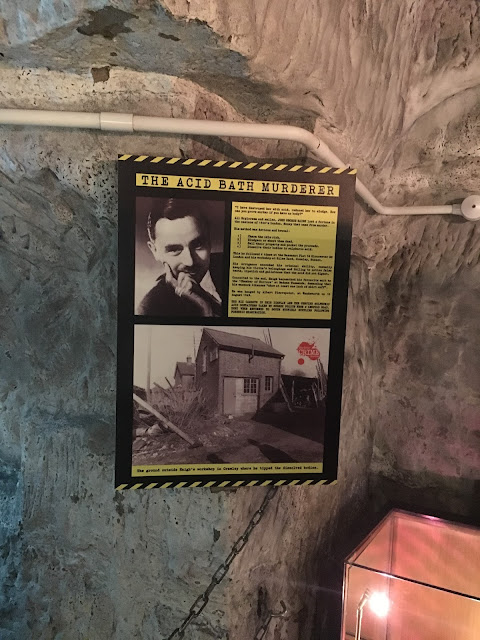 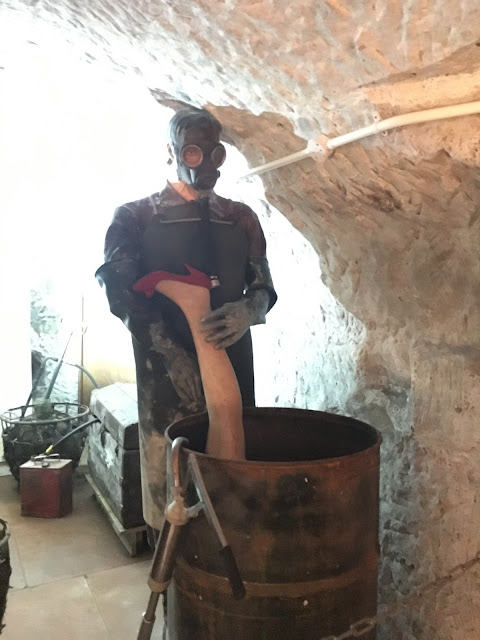 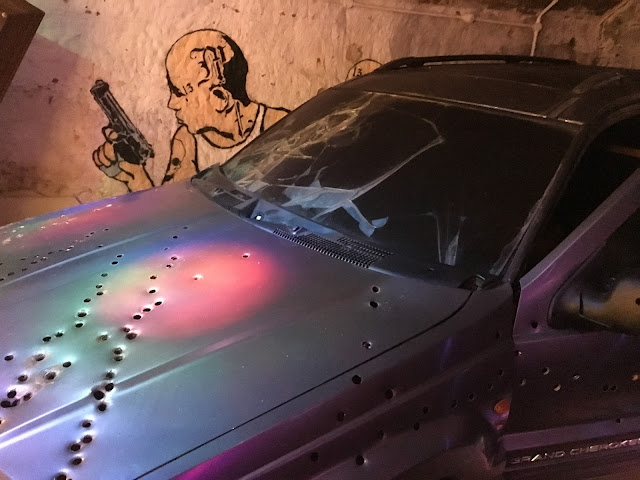 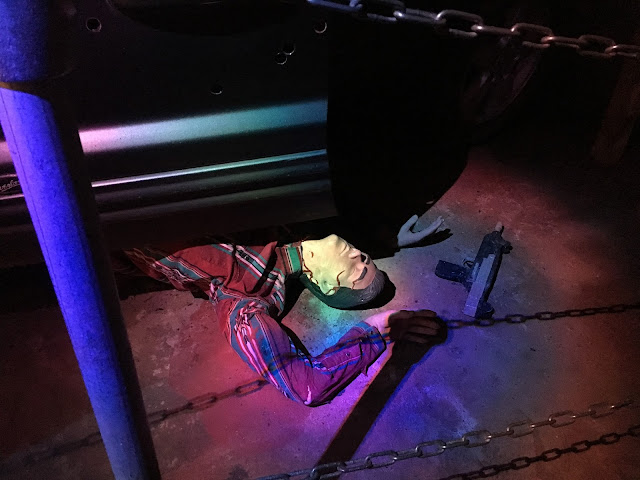 There's also plenty of actual evidence and items to illustrate particular crimes, and actual memorabilia, such as letters and drawings by serial killers and criminals, including the Krays.

One of the cave chambers has also been dubbed the death room, featuring actual items related to murders such as a bathtub used to dissolve a body, a real previously used noose and an actual medical gurney used for lethal injections, all very morbid but nonetheless intriguing. 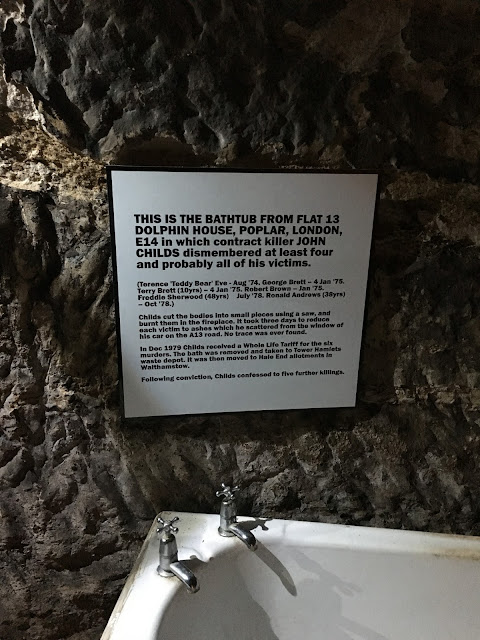 With a fun little challenge to complete when making your way round it made for a very entertaining hour or so if that sort of thing floats your boat!

They've just collaborated on an album made up of covers, radio sessions and self penned tracks called 'The Road To Glasgow' and embarked on a low key short tour of the UK to promote it.

They describe their sound a mix of Brill Building hooks and Byrdsian rock which is pretty accurate and the chance to see them in such an intimate venue was a real treat.

They also had a special guest in Tony Poole, guitarist with seventies band Starry Eyed And Laughing. 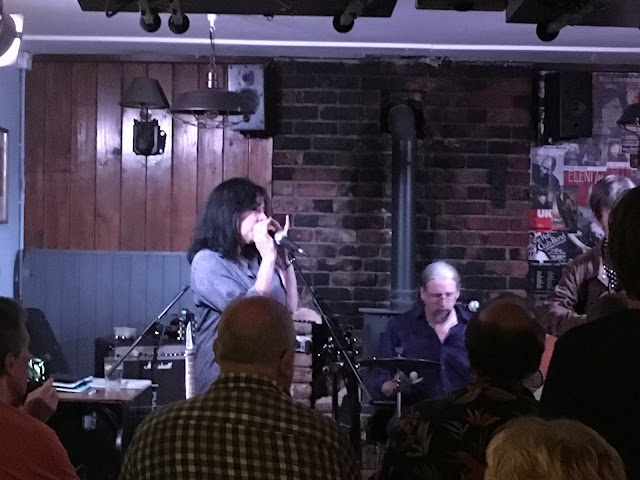 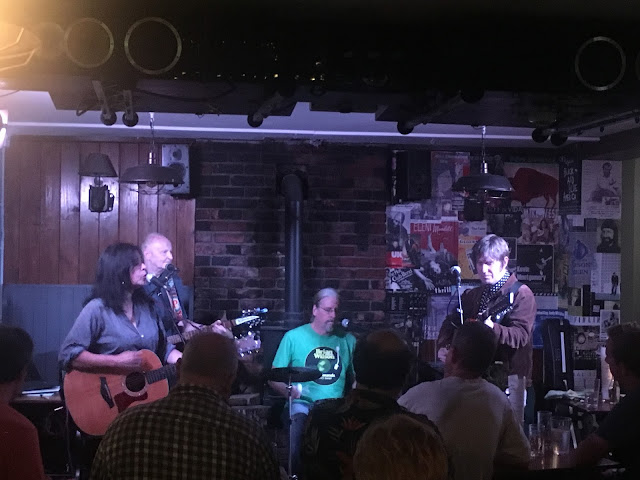 They played a variety of material from each of their solo releases as well as they stuff they'd penned together, and a plentiful selection of superb covers, including 'To Sir With Love' and 'Mr Tambourine Man' which really played to their strength of fantastic harmonies and meticulous musicianship.

They played for roughly two hours, and being such a small venue with a highly appreciative crowd it really felt like something special and personal which was great.

So on Tuesday morning before setting off home we decided to pop down to Brighton marina and play some neon dinosaur minigolf, as you do...

We love a bit of minigolf anyway so this looked like a bit of a different spin.

It's a twelve hole course which is in the dark but all the dinosaurs are painted with neon colours and the black lights provide enough light to see what you're doing basically. 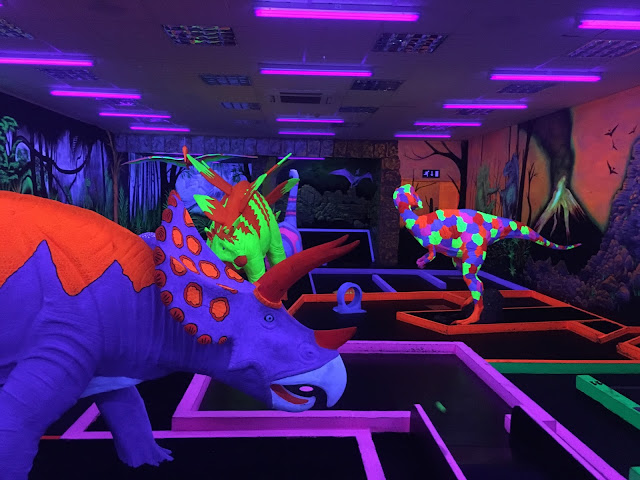 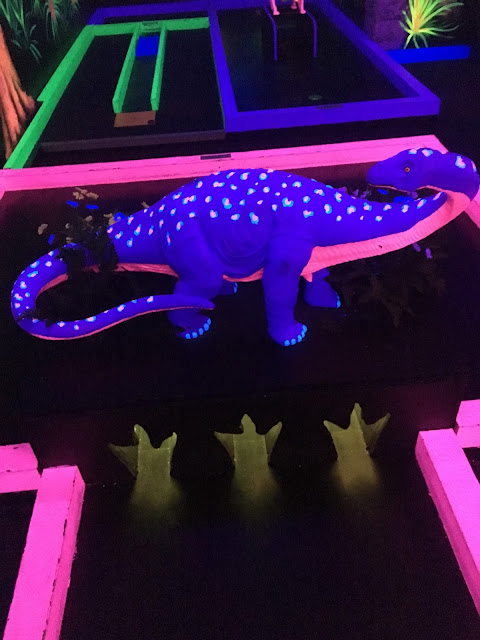 The design was quite compact, and a round didn't take more than about thirty to forty minutes, however some of the holes were quite tricky and the novel element works well enough.

We also saw a mum fall over which is always a winner!

If you're in the area and like a bit of minigolf it's probably worth a visit.

The next episode is a double week encompassing some international activities too, so stay tuned and get inspired...
Posted by Unknown at 09:36

Who are Culture Couple?

A London based couple in our mid-thirties, (OK, mid to late...), who met nearly four years ago on a first date to the David Bowie Is... exhibition at the V & A, and our cultural exploits have just expanded from there.
We're always up for seeing, hearing, looking at or experiencing the many delights on offer in our city, whether it be a bit of opera, a classic film screening, a play or even spending the night alone in an art gallery on moving beds...
Hopefully this blog will inspire others to get out and experience what's on offer and maybe try something new...